Too hot to handle?

Friday 17th June 2022 and the temperature at Ascot racecourse was 31C. Two days earlier two horses had been pulled up during the Ascot Stakes. Marshall Plan and Surrey Gold were both reported by the veterinary officer to be showing signs of heat stress. That day the temperature was 24C. Despite a level 3 heat-health alert being issued on Friday, (level 4 being a national emergency) racing continued.

A spokesperson from Ascot racecourse Chris Stickels said, "We've raced at Royal Ascot in temperatures of 32C, 33C and 34C before. I don't want to sound flippant but we have plenty of water and devices here to help out with cooling horses. There's lots of water around and we have the cooling misting fans to use too." Meanwhile visitors to the racecourse that day were treated to a relaxed dress code that day to increase human comfort due to the extreme heat.
With royal visitors and high-profile guests attending, the horses comfort seemed less of a priority.

Meanwhile in many greyhound tracks in the UK, dogs were also made to race in these temperatures. The Greyhound Board of Great Britain (GBGB) state in its Rules of Racing outlines specific requirements during the transportation of dogs, including a temperature of 10-27C which must be monitored (McNicholl, 2016), yet they were allowed to run at temperatures more than 31C. Greyhounds do not share quite the same royal status shown to horse racing with dogs subjected to lives of confinement, practices that are cruel, and suffering track related injuries that often result in euthanasia. Greyhounds with their short coats and thin skin are particularly vulnerable to temperature extremes, being prone to heatstroke in hot conditions.

Yet despite this UK politician David Lipsey was quoted on Wednesday saying, “But greyhounds in this country are not “cruelly treated”... They are invariably and passionately loved by the trainers and the staff who look after them. And racing is not cruel or dangerous for the dogs.” (Guardian online, 15.06.22).

The general public seemed to take more care with their companion animals, with advice from vets and pet organisations warning of the dangers of walking dogs in warm temperatures; burned paws on hot asphalt and heatstroke being the main concerns. Pet guardians were urged to keep their furry family well hydrated and cool. Social media reflected this with many reports of dogs in paddling pools or relaxing inside in the shade. 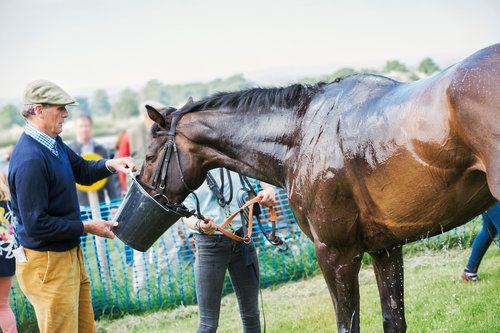 Yet for those animals expected to perform for our entertainment, this level of care and concern is not so applicable

So why do humans overwhelming support being kind and compassionate to their pets, yet seemingly ignore the suffering that occurs on race tracks?   Cognitive dissonance is defined as the state of having inconsistent thoughts, beliefs or attitudes, especially relating to behavioural decisions and attitude change. Most people are aware of this having experienced the feeling of being an animal lover, yet choosing to eat meat, a concept known as the ‘meat paradox’.   We maintain this state by rationalising behaviour; ‘everyone watches racing’, by being in denial; ‘I don’t want to think about it’, reducing the importance of their belief, ‘horses are bred to run’, and so on. The issue is society wide and impacts many of our interactions with animals. Scientists have theorised that certain animals are granted more compassion than others based on factors such as perceived intelligence, how cute they are and how many human-like qualities they possess.   The only consistent thing about human interactions with non-human animals is inconsistency. We have rival thoughts, moral judgements and societal pressures that sit in our subconscious. We don’t always operate logically else this poor treatment of animals in what we call the leisure industry would not happen. It is time that we broaden our thinking and try to see things from the animal’s perspective as much as our own. It really is quite simple – would you want to be running full pelt around a track in 31C? I doubt it and I doubt those animals did too.
Drag to resize
If you want to learn more about human animal interactions take a look at our courses page.
.

Course prices do not include VAT