The Case Against Pack Theory 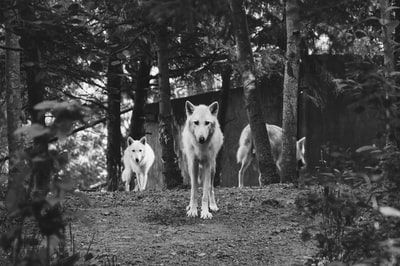 Pack theory is sometimes still used as a philosophy and method to train domestic dogs, based on the findings of Schenkel (1947) who researched a group of captive wolves. As he saw it, the wolves were fighting for dominance over other individuals and status within the strict hierarchy of a pack, the winner of these aggressive displays was thought to be the ‘alpha’.
In dog training the pack theory is often seen as a natural way of interacting with dogs, but Schenkel’s study did not look at groups of wolves in their natural environment. They were a group of unrelated captive wolves, in an unnaturally small enclosure with scarcity of resources, which means his study did not show how wolves behave in their natural habitat.
It was Mech (1999) who found the typical wolf ‘pack’ is a family, without a strict hierarchy of dominance, but with a family structure where activities such as providing food or caring for the pups are divided amongst the parents and possible older siblings. Present-day wolves are not the domestic dog’s direct ancestor, rather they both arose from a common ancestor, a now extinct wolf population (Bergström et al, 2020), arguably making the urban and non-urban feral dogs a better example of natural dog behaviour. These feral dogs do not live in structured social packs either, but rather form loose, fleeting, unstructured associations, which questions the validity of the canid social dominance hierarchy once more (van Kerhove, 2004).
Though dogs are social animals who engage in social play and social learning from conspecifics, they are not inherently pack oriented animals. They form social relationships, but not linear hierarchies(Feddersen-Petersen, 2007), Schenkel (1967).

Pack theory as a training method
Dog owners are often warned not to let their dog become the dominant alpha, encouraging them to use aversive training methods to keep control over their ‘pack’, a method popularised by the media through Cesar Millan (Millan, 2021) amongst others. According to Overall (2013) what the pack theory fails to explain is that dominance pertains to an individual’s ability to maintain or regulate access to resources. It is not a character trait or a to be confused with status or aggression (p.218-219). The lack of resources in the Schenkel study was one of the reasons which led to the aggressive displays amongst the captive wolves. Even though dogs and wolves share similarities, domestication has also led to fundamental differences, one of those differences lies in the ability to communicate with humans.
The ability of dogs to communicate effectively with humans has a genetic basis and does not require extensive socialisation. For example, where dogs look at humans when confronted with an insoluble task, wolves do not, not even after an extended socialisation period (Bray et al, 2021, Miklósi et al, 2003). Overall (2013) explains a hierarchical relationship would not have allowed dogs to cooperate and communicate with humans in the way they have, since that way humans would have had to make all the decisions (218-219).

Even though it seems clear that pack theory is not applicable to wolves, let alone to domestic dogs, human-dog interaction or dog training, it is still pervasive in dog training practices.

Punishment
Apart from popularisation through media, there are other factors which influence the readiness of people to use this method, one of those is the use of aversive techniques. Physical punishment such as the 'alpha-roll', the use of corrective collars or leash corrections are often used by proponents of pack theory. According to Chance et al (2009) punishment works, at least in the short term, which leads to the one who punishes to be reinforced. In other words, punishing unwanted behaviour is reinforcing to us as handlers. And what’s reinforced will by definition occur more frequently in the future. But punishment comes with fallout, especially physical punishment.
These problems include escape, avoidance, aggression and apathy, which is why it is strongly advised to look for alternatives (p.219 – 220). Even if dogs were to form strict hierarchical packs and form these packs with humans – using punishment to assert dominance as a leader seems counterproductive.
“The most devastating advice ever given to people with dogs is that they 'dominate' their dogs and show the 'problem' dogs 'who is boss'. Under this rubric, untold numbers of humans have been bitten by dogs they have betrayed, terrified, and given no choice.” Dr. Karen L. Overall.